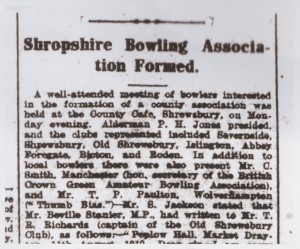 Shrewsbury clubs were the driving forces in the formation formation of organised bowls in Shropshire via the County Association, but it was Oswestry sides that led the way in the advancement of league bowling in the county. For it was in the small market on the Welsh borders in 1925 that Shropshire’s first league, the Oswestry and District, was formed – soon followed by the launch of the Shrewsbury League in 1926.

Hanwood joined in 1927 and the league enjoyed steady growth in popularity, so much that a division was started in 1933 (won by Postal) and a third division in 1951 (won by Grinshill). Meanwhile, the existing clubs had grown in membership and reserve divisions were formed from 1935 onwards – and there have been as many as five of them since.

The league has been well served by officers and Harold Kaye, Dick Meyrick, Doug Lawrence and Barry Jennings have all served as British presidents. It was the proud boast of Jack Smout (league chairman) and Harry Lyon (treasurer) that together they served the league as a team for 21 years. More recently the league has been sustained by Ken Sargent (assistant secretary and then secretary), Terry Sambrook (treasurer, chairman and president), Dick Meyrick (president), Tony Gibbons (chairman, general secretary and president). Paul Adams (20 years treasurer) and not forgetting the late Dave Card (president who had a very active role in refereeing).

By 2001 the league had grown to 55 clubs with 60 reserve teams from most areas of the county, and to celebrate its 75th anniversary it was renamed the Shropshire Bowling League. 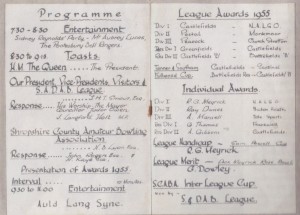 In 1991 the league accepted a sponsorship deal from Tanners Wines. The Tanner and Southam Cup had been played for by first teams since 1943 and this fact had been recognised by Tanners in offering their deal which, apart from an annual cash sum, included 40,000 score cards. This sponsorship now spans more than two decades.

Since 2000, when he became secretary, the league has relied heavily on Andy Price with the support of his family to keep things running smoothly and, since 2005, Ann Parish has done very efficient work in compiling and recording fixtures.

Just as the number of divisions expanded, so did the competitions. The Merit and Handicap had been on-going since 1932 and 1927 respectively while the Fullwood Cup was played for each year since 1945 (first winners Monkmoor). Youngsters were encouraged and the Harold Kaye Trophy was introduced in 1964 as an under-18 Merit and the Peter Fullwood Youth Doubles in 1970. Other competitions which have been introduced include the Tanner Champagne Cup, the Scadding Cup, the Frank and Mabel Edwards mixed doubles, the Terry and June Sambrook Cup for doubles and the end of season Terry Croft Memorial for the league’s Champion of Champions.

by Tony Gibbons
from THE LONG AND THE SHORT OF IT

Bowls before the County Association 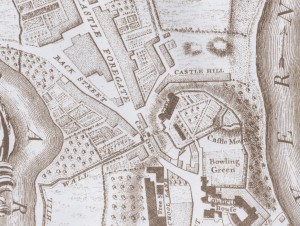 Sir Francis Drake’s alleged game at Plymouth Hoe in 1588 – with the Spanish Armada approaching – and the Shakespearean references to the sport show that bowls in some form was alive and part of English society more than 400 years ago.

There is even earlier evidence too, the Shropshire Handbook of 1922 stating that the Southampton Town Club “have proof that their green was laid as far back as the reign of Edward I, about 1299”.

In Shropshire there is a clear link between the earliest bowling greens and the castles built by English kings. The infamous Henry VIII often played the game, and stories abound of archers of those days being reprimanded for not practising but playing bowls instead.

By the time his reign ended in 1547 it is safe to assume that bowls was being played in Shropshire.

Ludlow Castle bowling green, situated in the outer bailey of the famous fortification, was certainly in use when the Castle was occupied by the Sidney family (1559-1586) according to Shrewsbury historian George Spender. The castle at Ellesmere had become derelict by the end of the 16th century and,once much of the stone had been removed for building purposes, the castle keep there was then used as a bowling green. The green at Bishop’s Castle lies within the former castle and Mr Spender makes a strong case for bowls being played in medieval times at the site of Clun Castle too. 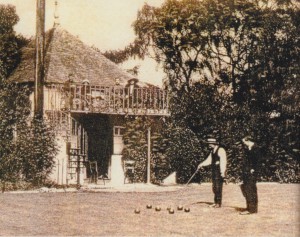 John Roque’s map of 1746 shows a bowling green at the entry to the grounds of Shrewsbury Castle and his 1753 maps show greens at Kenley, near Much Wenlock (between the church and Kenley Hall), and Longnor, near Dorrington, south of Shrewsbury.

But the earliest attempt to organise bowling in Shropshire for which records exist was made at a meeting at the Unicorn Hotel in Wyle Cop (now Tanners Wines) – the home of the Shrewsbury Bowling Club – on March 8, 1895. That meeting was presided over by Mr H. D. Greene QC, MP, and was attended by representatives of clubs from Shrewsbury, Craven Arms, Bridgnorth and Whitchurch.

The objectives of the gathering were “to bring County Clubs into friendly rivalry and not interfere with their existing home and away fixtures”. Ten clubs had indicated that they would join but only seven had paid the subscription of two guineas.

It was agreed that all matches would be played under “Royle’s Rules”. Royles were a firm of bowls manufacturers in Manchester who devised the playing rules probably in an attempt to standardise them – and they were later generally adopted by the British Crown Green Bowling Association.

There is no record that an association was actually formed in 1895, but the convening of the meeting confirms that there were many bowling clubs in Shropshire at the end of the 19th century.

by Jeff Hutchinson
from THE LONG AND THE SHORT OF IT